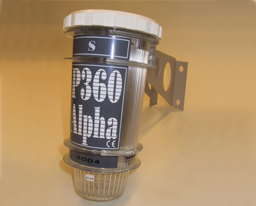 Pathfinder 360 Alpha is an inductive overhead line Fault Passage Indicator, designed to be installed on the pole 3 metres below the conductors,  that senses out of balance of electro-magnetic field in a single or  3 phase, solidly  earthed  HV network at between  6 to 36KV (or equivalent voltages). It will sense both phase to phase and earth faults of values down to a nominal 12 amps, sensing also the surrounding voltage field, to determine whether a fault has been  transient or permanent. The presence of the voltage field will also reset Pathfinder on restoration  of HV supply.

The instrument continuously monitors the residual current and voltage fields from the overhead line conductors and is triggered when it detects fault current above the current/time di/dt  threshold curve,  passing in the line conductors.