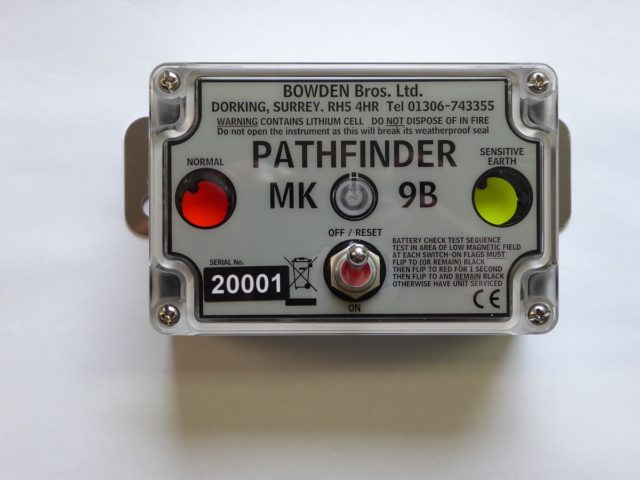 The Pathfinder MK9B  continues  the enormous success of the  MK8  but  now can detect  very low value SEF faults, as a result of  2  algorithms running in parallel. The first follows that of the  traditional MK8 in detecting  fault current   above  15 amps  which have a duration longer than 50msecs.  These faults will  trip the NORMAL – RED flag.  However, if a current of between  3 and  15 amps is detected and has a duration longer than 3 seconds the MK9B   will  trip the SENSITIVE EARTH FAULT – YELLOW flag.   In this way the fault engineer will know  more about the fault,  and has the ability to locate  very low value faults with confidence.

The single switch  turns the instrument on/off  and carries out a battery test by flipping each of the flags in turn before returning them to black.  The MK9B  will respond to both  earth fault and phase to phase faults, and is mounted at  eye level  on the supporting pole.

Testing at  PNDC Strathclyde  has proven the principal of detection of low value currents,  and just as importantly  the stability of  the MK9B  beyond the fault  or on a  spur with no fault to remain  untripped.